The lineage of this sweet, leavened bread can be traced back to Roman times. It is most associated with Milan and there are many legends about it’s development. One tells of a nobleman, Ughetto Atellani, who fell in love with Adalgisa, the daughter of a poor baker named Toni. To win Adalgisa’s heart, Ughetto disguised himself as a baker and invented a sweet bread to which he added eggs, raisins and candied orange peel. The ploy worked, according to the legend, and Leonardo da Vinci (hah!), who attended the marriage, was so impressed by the “Pan de Toni” (or Toni’s bread) that he helped spread it’s popularity. More likely, the name comes from it’s literal translation from the Italian “big bread,” because it is known for it’s tall proportions.

Here are some recipes for panettone:

Panettone is lightly sweet and a bit dry. It’s intended to be eaten as an accompaniment to a hot beverage such as hot chocolate, tea or coffee. It also makes excellent French toast and there are several delicious bread puddings that can be made with it. Here is our favorite pudding recipe:

To make the sauce: Bring the cream, milk, and sugar to a boil in a heavy small saucepan over medium heat, stirring frequently. In a small bowl, mix the amaretto and cornstarch to blend and then whisk into the cream mixture. Simmer over medium-low heat until the sauce thickens, stirring constantly, about 2 minutes. Set aside and keep warm. (The amaretto sauce can be made up to 3 days ahead. Cover and refrigerate. Rewarm before serving.)

Preheat the oven to 350 degrees F.

Bake until the pudding puffs and is set in the center, about 45 minutes. Cool slightly. Spoon the bread pudding into bowls, drizzle with the warm amaretto sauce, and serve. 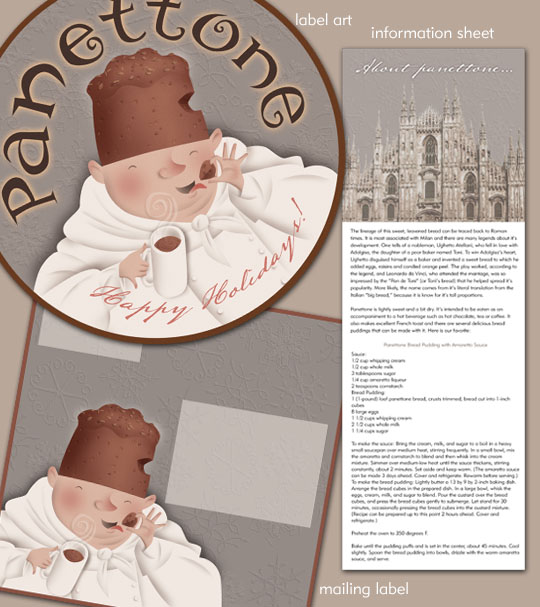 Posted by Tracy Sabin at 9:12 AM No comments:


Spicy, nutty and sweet, lebkuchen were invented by monks in 13th century Franconia, around the present-day town of Nuremberg, Germany. In 1487, emperor Friedrich III presented children with Lebkuchen imprinted with his portrait during a gathering of the estates of his realm. Ingredients include honey, nuts and an indulgent blend of spices including anise, coriander, cloves, ginger and cardamom. Lebkuchen are often glazed with sugar or spread with a thin layer of dark chocolate. They are typically round and soft, though a harder version comes in the shape of a heart with a written inscription on top. Here are a few recipes: 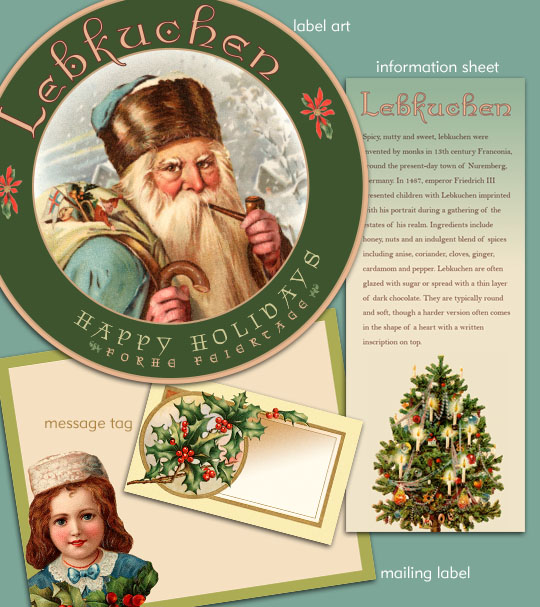 Posted by Tracy Sabin at 1:48 PM No comments:

Chutney, derived from the Sanskrit word “caṭnī,” denotes a wide range of relishes that originate as far back as 500BC in the India and Pakistan regions of South Asia. Made from all sorts of vegetables, fruits, herbs and spices, chutneys typically taste both sweet and tart. Fig chutney consists of figs, onions, vinegar, sugar and spices boiled down to a thickened, jam-like reduction. 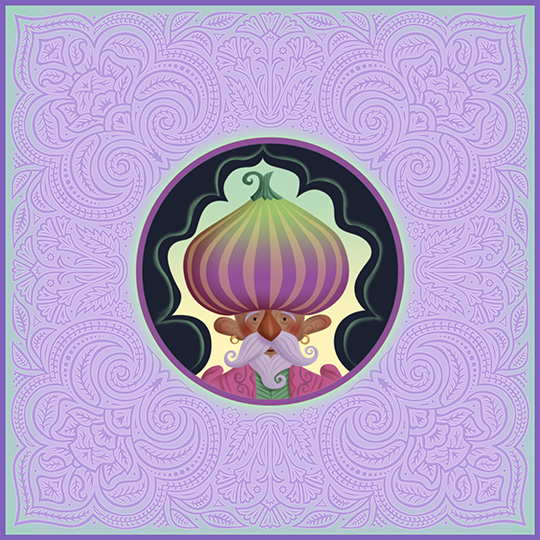 Because of their complex sweet/savory flavors, chutneys can be eaten with a number of different foods, whether as a complement to a selection of cheeses, as an accompaniment with desserts, served as a relish for meats or curries, or used simply as an appetizer. Here are a few recipes: 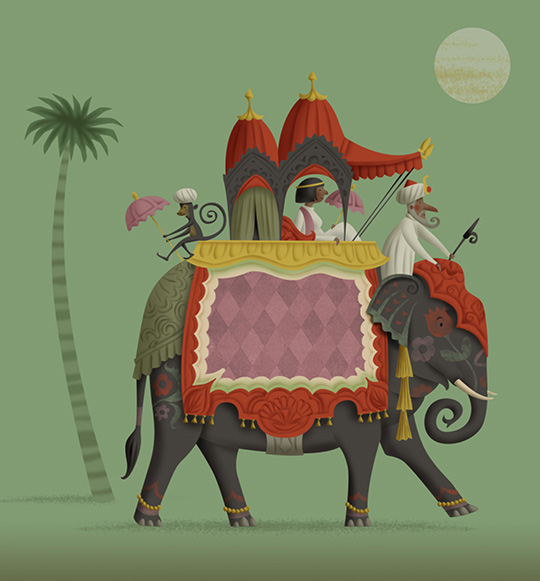 We used the charming Weck canning jars for our batch: 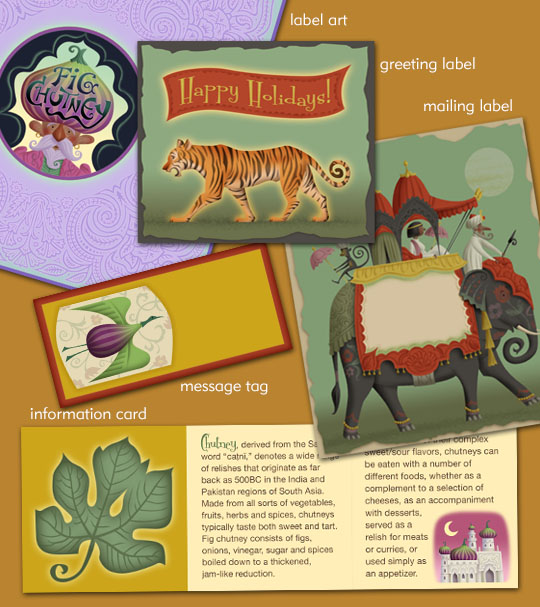 We know about sugar plums because of the “Nutcracker Suite” and “The Night Before Christmas,” but what exactly were sugar plums? It's difficult to find a definitive answer. Food historians tend to dismiss the idea that sugar plums were made from actual plums. The earliest sugar plums were probably a candy with a coriander or nut center coated with several layers of boiled sugar. 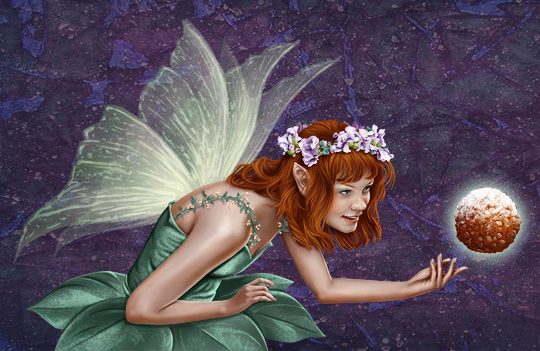 Over time, “sugar plum” became a term applied to various types of candy that are approximately the size of a plum. Most modern recipes include dried fruits and nuts, held together with honey and formed into a ball. Here are a few recipes: 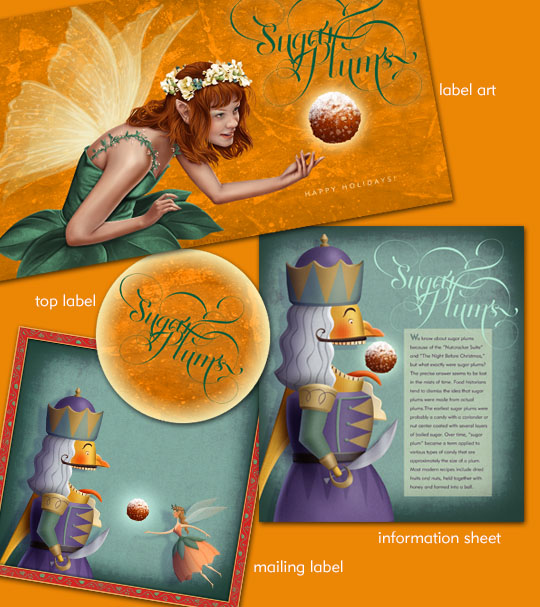 We repurposed empty aluminum Illy coffee containers to hold our sugar plums. Labels can be affixed to cover the original typography on the cans and the lid can be spray painted to match the colors of the label. 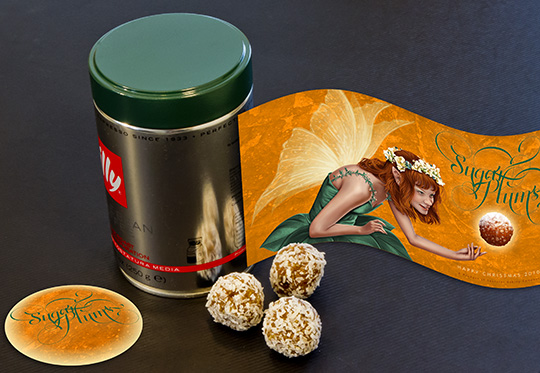 Posted by Tracy Sabin at 9:28 AM No comments: